TheHunter: Call of the Wild Wiki
Register
Don't have an account?
Sign In
Advertisement
in: Weapon, DLC

"The Andersson .22LR is a small caliber semi-automatic pistol. Its compact size, negligible recoil and impressive firing rate make it practical for a wide variety of applications, from target shooting to small game hunting and personal defense. This .22LR pistol shoots as beautifully as it looks and features a variety of customization options, as is customary for Andersson firearms."
― In-Game Description

The Andersson .22LR is a semi-automatic pistol, ideal for hunting small game such as rabbits. While the .22 LR cartridge lacks the penetration to be effective against small deer, it excels at hunting rabbits. Thanks to the large magazine, it can offer quick follow up shots when shooting multiple targets in rapid succession.

Similar to the Virant .22LR, it only supports one ammo variant:

The Andersson .22LR Marksman is an alternative style with a brushed gold exterior and a black grip.

The Andersson .22LR Defender is a variant with a black steel body, and a military brown grip.

Comparison to other pistols[] 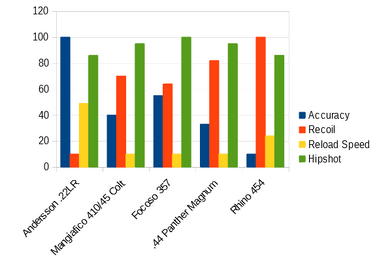