Axis deer, also known as the chital, is a deer species native to South Asia. Throughout the 19th and 20th centuries, axis deer were introduced throughout Europe, Australia, America, and even Hawaii as game animals, but their population has drastically reduced in Asia, A moderately sized deer, the axis deer are known for their rusty-red coats with permanent white spots, the stags' three-tined antlers, and their loud "screaming" vocalizations. Though axis deer prefer to feed on leaves, they are adaptable feeders and can generally be found in woodlands, forests, and clearings near waterways. Their group sizes are highly dependent on the seasons as well as the availability of leafy forage and a permanent source of water (axis deer drink every day). In the right conditions, large herds can number over 100 deer however the average herd size is much lower. They are most active at dawn and dusk and rest under the shade of trees during the day.

Axis deer are very smart animals. They will see you coming from a ways away and their smell is extremely good. Axis Deer go through the "roar" also known as the rut at the end of spring and beginning of summer. Axis Deer lifestyles are all different, the main time for shedding their horns is at the beginning of winter but throughout the year the bucks might drop their horns. Some even go through the rut in winter, it just depends on when they were born.

Axis Deer bucks only scream, they scream only in the rut and doe's will bark for mating call sometimes. Their alert call a is bark, so when you hear a bark you know they know you're there. There is no way of telling its a buck or a doe barking at you until you see them. (Real-life that is) But in this game, all you simply need to do is check the ID call.

There is a lot of good ways to hunt the Axis Deer, here are the best:

The Axis Deer roam around the middle of the map in the decently dense forest. They always stay around the lakes. You can always catch a buck and a few does around some lakes in the central and South-Eastern part of the map.

There are 13 ammunition that gives full integrity on the Axis Deer.

The fur variants Dark and Orange are relatively common, unlike the uncommon variants Melanistic and Piebald or the rare Albino variant. 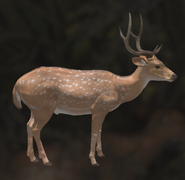 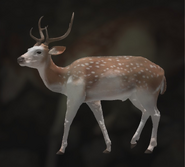 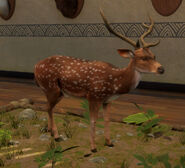 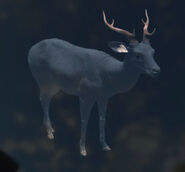 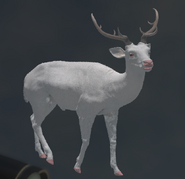