The blacktail deer is generally considered a subspecies of the mule deer and native to the western part of North American continent although new science suggests it could be its own species and not a subspecies. The blacktail thrives around the edges of forests that are typically rich with foliage and grass which they feed on. They tend to avoid open areas that lack hiding spots, especially during harsh weather. The blacktail is a medium-sized deer, comparable to the whitetail deer, but blacktail bucks' antlers take different patterns that are more similar to the mule deer's. The blacktail's antlers grow from a spike into a distinctive double-fork shape.

There are 23 ammunition that gives full integrity on the Black-Tailed Deer. 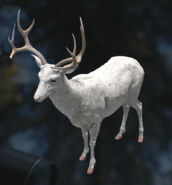