TheHunter: Call of the Wild Wiki
Register
Don't have an account?
Sign In
Advertisement
in: Animal, DLC, Vurhonga Savanna Animals,
and 2 more

The Blue Wildebeest, also known as the Gnu, is an African bovid with broad shoulders, cow-like horns, and a broad muzzle. A keystone species in plains and acacia savanna ecosystems, the wildebeest is, in fact, an antelope, despite its various bovine characteristics. The larger of the two wildebeest species, the blue wildebeest is a grazer superbly adapted for migratory existence. They range in mass from 118.00 kg to 290.00 kg and stand 115 - 145 cm tall. Male wildebeest are generally larger than females, while females are lighter in color. Wildebeest are highly gregarious and stay in large groups for most of their lives. Blue wildebeest herds can number the fifties, all the way to the thousands, and their chaotic, raucous stampedes are truly iconic.

There are 18 ammunition that give full integrity bonus on the Blue Wildebeest. 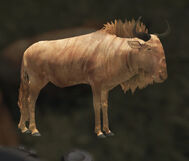 Crowned (on a plaque)