Yukon Valley
The Caribou is a class 6 deer. It can be hunted in Yukon Valley. While similar in many ways (e.g. need zone times and trophy scores) to the Reindeer of Medved Taiga National Park, it is slightly different in appearance.

Caribou is the given name of wild reindeer in North America and they are primarily found in Alaska and Canada. They have gone extinct in the lower 48 states with the last herds living in the northern Rockies before extinction. Interestingly, they have never been domesticated despite their importance in native culture. They have the longest migrations of all known land animals with yearly migrations of large herds covering several thousand kilometers. Caribous are considered a vulnerable species and their population has been in continuous decline for the last few decades. The disruption of their habitat by human activity (deforestation and oil mining) and climate change have been identified as key factors. However there are still over a million in Canada's boreal and mountain forests and tundras. Like the Eurasian reindeer, both male and female caribous grow antlers. Adults measure between 85 and 150 cm at the shoulder. Females weight up to 120 kg while males can exceed 180 kg. Males and females live together in small groups that merge into massive herds when they migrate. They feed on mosses and lichens in the winter and during the summer on grasses and other green vegetation. Their main predators are gray wolves but grizzly bears can kill calves.

There are 18 ammunition that give full integrity bonus on the Caribou.

Everything is rare besides common. Fur Variants[] 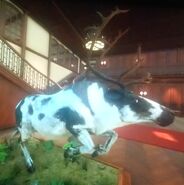 Picture of a Melanistic Male Caribou