The cinnamon teal (spatula cyanoptera) is a small dabbling duck with characteristic cinnamon colored plumage on males and a duller brown plumage on females. Cinnamon teal can be found across the western United States, extreme southwestern Canada, and Southern America. While females and non-breeding males have more coarse, brown coloration across their bodies, breeding males have long black bills, red eye coloration, black backs, and rear, with white underwings. Green secondaries and sky blue shoulder feathers also become visible in flight. The cinnamon teal is significantly smaller than the mallard, weighing in at under half a kilogram (approximately a pound), with a wingspan of no more than 65cm. 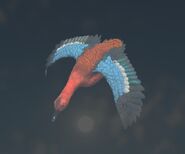 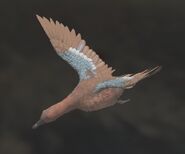 Melanistic
Add a photo to this gallery

Retrieved from "https://thehuntercotw.fandom.com/wiki/Cinnamon_Teal?oldid=10336"
Community content is available under CC-BY-SA unless otherwise noted.