TheHunter: Call of the Wild Wiki
Register
Don't have an account?
Sign In
Advertisement
in: Weapon, DLC, Equipment, Shop

"Versatile and elegant, this three-barreled combination gun sports twin side-by-side 16 gauge shotgun barrels atop a single rifle barrel chambered for the powerful 9.3x74R big game cartridge. If you're hunting waterfowl and happen to stumble upon a red deer, this gun has your covered."
― In-Game Description

The Grelck Drilling Rifle Classic is a unique shotgun that has an additional rifle barrel, making it the only combination gun of the game. It sports a standard side-by-side double-barrel design for 16 gauge shells and a third barrel for a high-powered rifle round. Capable of hunting any class of game by switching ammo types, it is one of the most versatile weapons available for hunters. The term "Drilling" is a descriptive term used for combination guns and comes from the German expression for "triplet", indicating that the gun has three barrels.

Switching ammo-types can be done by holding the reload button. The switching ability can be used for hunting large groups of deer by opening with a rifle shot, then quickly switching to buckshot or slugs to catch a few more kills. The gun is listed in the "shotgun" category in the game; however, when using the rifle barrel, it is treated as a rifle. Therefore, it is the only weapon that can grant two different types of weapon score points: When using the 16 gauge shotgun ammunition, one receives shotgun score points and when using the 9.3x74R cartridge one receives rifle score points.

Unique to the Drilling is the five variants of ammunition available:

The Grelck Drilling Rifle Carbon Fiber is a variant that features a modern polymer body, and a black barrel and receiver.

The Grelck Drilling Rifle Select is an alternate style aiming to look like a premium version. This includes a traditional wood body, additional inlay work, and a chromed barrel.

Comparison to other shotguns[] 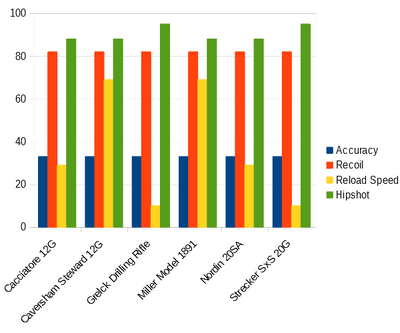