TheHunter: Call of the Wild Wiki
Register
Don't have an account?
Sign In
Advertisement
in: Weapon, Equipment, Shop

"This sleek, modern revolver is the ideal companion for hunters looking for versatility at short distances. Load with .410 shotshells for hunting small game and waterfowl or with .45 Long Colt for small big game species such as roe deer and springbok. A small handgun for all small game."
― In-Game Description

The Mangiafico 410/45 Colt Flat Black is a unique handgun as it can load both standard .45 Long Colt rounds, in addition to .410 birdshot shells. This makes it a very versatile sidearm for hunters.

As with most pistols, two variants of its ammunition are available:

The Mangiafico 410/45 Colt Muertos is a variation featuring a brushed gold plated body, with a black grip, inlaid with Día de Muertos decoration and symbology.

The Mangiafico 410/45 Colt Muertos is an alternate style with a polished stainless steel body and grip. The grip is patterned in a hexagonal formation.

Comparison to other pistols[] 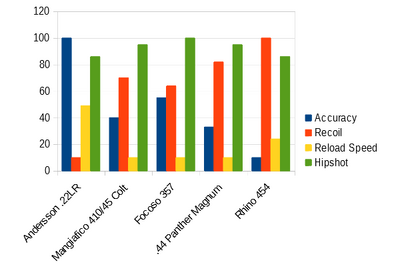