TheHunter: Call of the Wild Wiki
Register
Don't have an account?
Sign In
Advertisement
in: Weapon, Shop, Equipment

"A firearm as tenacious as they come, this lever-action shotgun follows the legacy of the gun that won the west, delivering unrelenting power with its 10 gauge brass shells. With the largest bore in any commercially produced shotgun, the Miller Model 1891 leaves little to be desired when it comes to close-range stopping power."
― In-Game Description

The Miller Model 1891 Rancher is a classic lever-action shotgun. Known for its reliable operation and plentiful use during the end of the 19th century, it is still used throughout the world as a traditional rifle for hunting. Thanks to its shotgun design, it is capable of hunting the vast majority of game available across the reserves.

This weapon is available as part of the Smoking Barrels Weapon Pack DLC.

As with most shotguns, three variants of its ammunition are available:

The Miller Model 1891 Deputy is an alternate style a gold trim and iridescent plating on the side of the receiver.

The Miller Model 1891 Sheriff is a variant built from dark brown wood, and black metal. The receiver has golden filigree inlaid onto the side.

Comparison to other shotguns[] 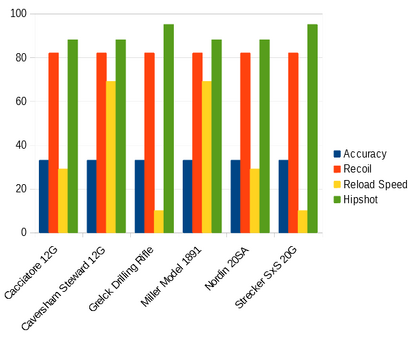