The mountain goat (Oreamnos americanus), also known as the Rocky Mountain goat, is a hoofed mammal endemic to North America. A subalpine to alpine species, it is a sure-footed climber commonly seen on cliffs and ice. Despite its vernacular name, it is not a member of Capra, the genus that includes all other goats, such as the wild goat, Capra aegagrus, from which the domestic goat is derived.

Both male and female mountain goats have beards, short tails, and long black horns, 15–28 cm (5.9–11.0 in) in length, which contain yearly growth rings. They are protected from the elements by their woolly white double coats. Mountain goats can weigh between 45 and 140 kg (99 and 309 lb), and billies will often weigh less than 82 kg (181 lb). The head-and-body length can range from 120–179 cm (47–70 in), with a small tail adding 10–20 cm (3.9–7.9 in). Mountain goats are the largest mammals found in their high-altitude habitats, which can exceed elevations of 13,000 feet (4,000 m). They sometimes descend to sea level in coastal areas although they are primarily an alpine and subalpine species. The animals usually stay above the tree line throughout the year but they will migrate seasonally to higher or lower elevations within that range.

In regions below the tree line, nannies use their fighting abilities to protect themselves and their offspring from predators. The mountain lion is perhaps the primary predator, being powerful enough to overwhelm the largest adults and uniquely nimble enough to navigate the rocky ecosystem of the goats.

There are 23 ammunition that gives full integrity on the Mountain Goat. 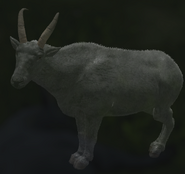 Melanistic
Add a photo to this gallery

Mountain Goat in Trophy Lodge
Add a photo to this gallery

Retrieved from "https://thehuntercotw.fandom.com/wiki/Mountain_Goat?oldid=14012"
Community content is available under CC-BY-SA unless otherwise noted.