TheHunter: Call of the Wild Wiki
Register
Don't have an account?
Sign In
Advertisement
in: Animal, DLC, Parque Fernando Animals,
and 2 more

The Mule Deer is a class 6 deer. It can be hunted in the Parque Fernando, Silver Ridge Peaks, and Rancho del Arroyo.

The mule deer (Odocoileus hemionus) is a species of deer named for its ears, which bear a resemblance to the large ears of a mule. While native to Western North America, the mule deer have been introduced to other parts of the world like Argentina for hunting purposes. The mule deer is related to the whitetail and blacktail deer but has evolved to be better than both in navigating in rugged mountainous terrain. In its native American range it is found in uneven terrain where sagebrush or coniferous forest are present. However it also inhabits open plains and even semi deserts. It stands larger than the whitetail deer, often reaching over 100 cm at the shoulder and having a nose-to-tail length of over 2 meters, additionally having significantly less variation across ranges. A highly sought after trophy animals and frequently hunted where found, the mule deer can present an incredible trophy. Their antlers are bifurcated, as opposed to branching from a single main beam, which is the case for with whitetails.

There are 18 ammunition that give full integrity bonus on the Mule Deer.

The fur variants Blonde and Grey are relatively common. The Dilute variant is less common and the fur variants Albino, Melanistic and Piebald are rare. 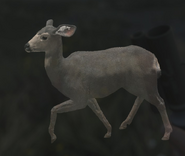 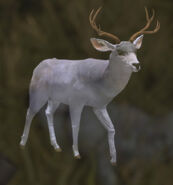 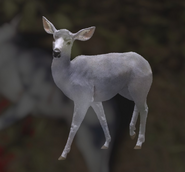 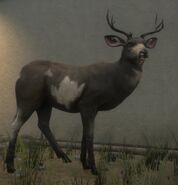