The pronghorn (Antilocapra americana) is a species of artiodactyl (even-toed, hoofed) mammal indigenous to interior western and central North America. It inhabits prairies, grasslands, desert scrubland and sagebrush steppe. Though not scientifically accurate, it is often colloquially referred to as an antelope because it closely resembles the true antelopes of Africa and fills a similar ecological niche due to parallel evolution. It is the only surviving member of the family Antilocapridae.

The pronghorn is the fastest land mammal in the Western Hemisphere, being built for maximum predator evasion through running. It can run at speeds of fifty miles an hour. Cougars, wolves, coyotes, and bobcats are major predators of pronghorns. Pronghorns form mixed-sex herds in the winter. In early spring, the herds break up, with young males forming bachelor groups, females forming harems, and adult males living solitarily.

Similar to giraffes, skin covers the bony cores, but in the pronghorn, it develops into a keratinous sheath which is shed and regrown annually. Unlike the horns of the family Bovidae, the horn sheaths of the pronghorn are branched, each sheath having a forward-pointing tine (hence the name pronghorn).

Found in the lower areas of the reserve, these stunning animals are sure to provide some great hunting opportunities!

Pronghorn tend to spawn in large herds and stick together. A good way to hunt them is to kill the highest leveled one, and then while they are running away, they tend to slow down very soon after being spooked, you can try to pick another one off. They also come back to feed and water zones very quickly similarly to Whitetail Deer and Blacktail Deer.

Infographic on the Pronghorn :

There are 23 ammunition that gives full integrity on the Pronghorn.

Currently the leucistic fur type is bugged, so that it is impossible to spot one. This will be fixed in the TRUaxis patch. 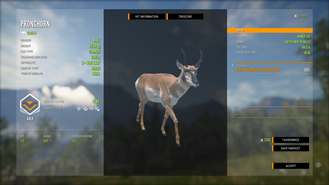 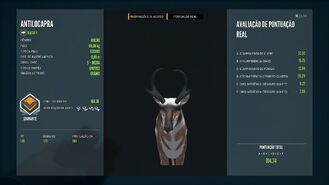 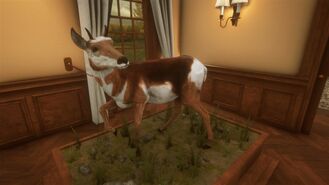 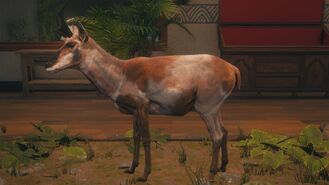 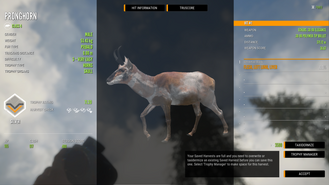 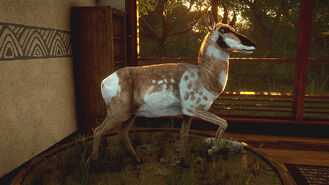 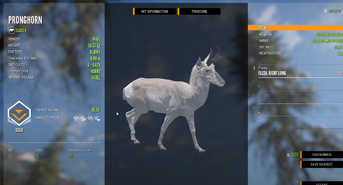 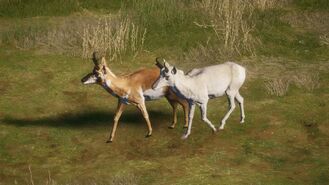 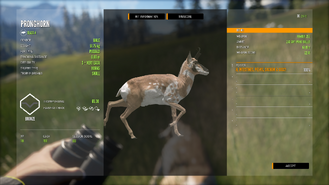 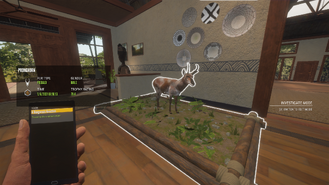 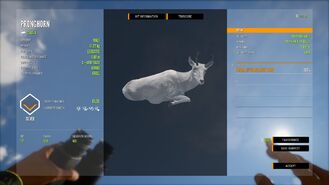 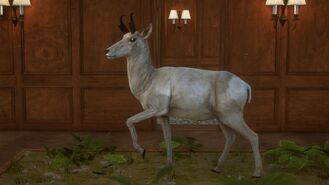