TheHunter: Call of the Wild Wiki
Register
Don't have an account?
Sign In
Advertisement
in: Animal, DLC, Parque Fernando Animals,
and 4 more

Parque Fernando
The Puma is a class 5 feline. It can be hunted in the Parque Fernando. In line with its scientific, biological description, in-game, the Puma is identical in every respect (other than its name) to the Mountain Lion in the Silver Ridge Peaks Reserve.

The puma, also known as cougar, catamount, or mountain lion (among over 40 other names in English alone) is the largest of small cats belonging to the genus Puma, of which it is the only surviving member. The puma is an ambush predator that preys on a wide variety of species and survives in an ever wider variety of habitats. It can be found from western Canada all the way to the tip of South America. Capable of growing to sizes larger than certain "big cat" species of the genus Panthera, the puma's shoulder-height can climb to nearly a meter and it can often weigh over 100 kg, despite averaging more closely to 70 kg. Pumas are incapable of roaring, due to a lack of the specialized larynx and hyoid apparatus unique to the Panthera genus, but do make several growling, snarling and purring sounds, in addition to an iconic and terrifying shriek. Pumas, despite being solitary animals, are a known menace for cattle ranchers and farmers. They are able to incapacitate and kill full-grown cows, deer, and other large animals, but are rarely spotted in the wild by adventurers or trekkers due to their secretive and elusive nature. Apart from habitat fragmentation and human hunting, the puma is rarely threatened in its natural home, where it is a respected predator, feared by man and beast alike.

There is 20 ammunition that give full integrity bonus on the Puma. 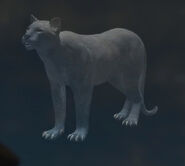