"Red deer are among the largest species of deer living in Europe, Western Asia, and Northern Africa. The species has also been introduced to other parts of the world. Closely related to the American elk , red deer are characterized by their reddish-brown fur. A typical buck also called a stag, may weigh in between 160.00 - 240.00 kg (350 - 530 lb) and develop large antlers over its lifetime. Stags are easily distinguished from their female counterparts, hinds, by their thicker necks. Red deer live in larger groups and tend to inhabit broadleaf deciduous forests with flat terrains and open meadows. However they can be found in steeper areas and higher altitudes as well. They are herbivores and pose little threat to humans unless startled at close range."
― In-Game Description

The Red Deer is a large-sized kind of deer (class 6). It can be hunted in the Hirschfelden, Parque Fernando, Cuatro Colinas and Te Awaroa reserves.

Need zone times for the red deer are identical for the Hirschfelden Hunting Reserve and Parque Fernando and are only slightly different in the Cuatro Colinas Game Reserve with an additional drinking time at midnight. However in the Te Awaroa National Park need zone times follow an entirely different schedule. 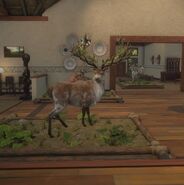