TheHunter: Call of the Wild Wiki
Register
Don't have an account?
Sign In
Advertisement
in: Animal, Deer, Hirschfelden Hunting Reserve Animals,
and 2 more

"The roe deer, also called western or European roe deer, is a very common native inhabitant of the European continent. They can be found all over the area, except in the northernmost parts of Scandinavia. Roe deer are a smaller species of deer characterized by their reddish and grey-brown fur. They also make a distinct barking sound when alarmed. Bucks develop antlers up to 0.20 m to 0.30 m (7 - 12 in) in length that typically branch into two, three, or even four points. Roe deer are herbivores, and like to feed on grass and cultivated soil. While primarily a forest animal, they often wander out into fields and areas with more sparse vegetation."
― In-Game Description

The Roe Deer is the smallest huntable deer in the game (class 3). It can be hunted in the Hirschfelden Hunting Reserve and Cuatro Colinas Game Reserve.

The roe deer need zone times are not identical for both Hirschfelden Hunting Reserve and Cuatro Colinas Game Reserve. 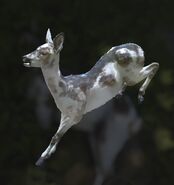 Male Roe Deer from behind