TheHunter: Call of the Wild Wiki
Register
Don't have an account?
Sign In
Advertisement
in: Locations, DLC, Reserves

Nestled at the foot of the Southern Alps, Te Awaroa National Park is home to the diverse biomes of New Zealand's South Island. Sika deer roam the lush, temperate beech forests of the west, while red and fallow deer are found in the hillsides of the east. Further up, chamois and feral goat play atop alpine ridges. Trace the trails of history, from the first Polynesian settlers to the hardy helicopters hunters who took on a great personal risk to preserve the reserve's unique biodiversity, or just stop and take in the magic with landscapes that have inspired countless fantasy worlds.
—In-game Description

The Te Awaroa National Park is an reserve was released on December 10th 2020 for PC and in early 2021 was for console. It is located in New Zealand. The warden of the reserve is Kiri Taylor. 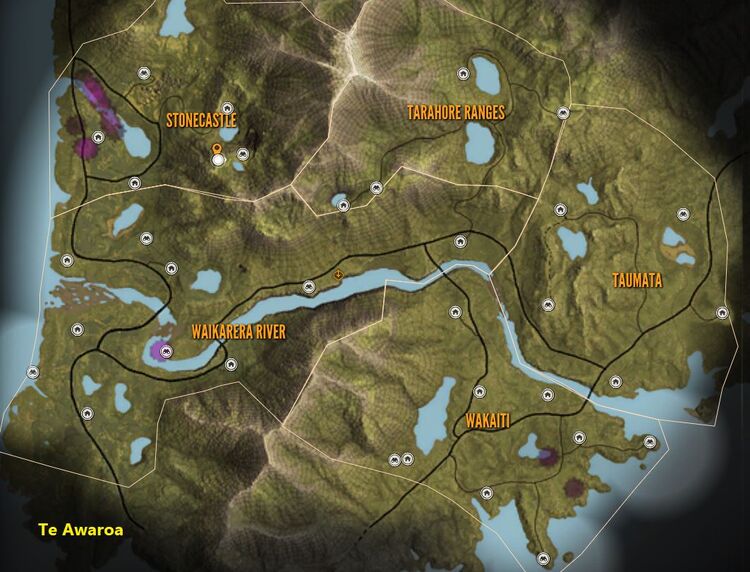 Tracking the numerous animals that roam Te Awaroa’s stunningly diverse environments is a favorite among hunters. For some, it’s the rush of stalking a prized Sika Deer in the beech forest that draws them here, while others come in hopes of catching a rare glimpse of the Feral Pigs, Feral Goats, and Chamois. And for those looking for a more relaxed experience, there’s plenty of Red Deer, Merriam's Turkey, European Rabbits and Fallow Deer to hunt.

It’s of no surprise that Te Awaroa has been used to depict fairytale landscapes, as it's ever-changing ecosystems are truly a sight to behold. From the steep, impressive mountains that divide the reserve, to the sparkling beaches and dense temperate forests, the region transforms under your very feet. There are also more familiar hunting grounds available, such as spruce and pine forests.

Stretching across a vast 25 square miles (64 square kilometers), Te Awaroa National Park has always been a place to get away from it all, both for the first Polynesian settlers and the hardy men who made their names hunting deer from helicopters. Times are tough though, and when warden Kiri Taylor reluctantly agrees to allow a series of Hollywood films to be made in the reserve, it goes from sleepy backwater to daytripper hotspot almost overnight.

Now, with the reserve's delicate ecology threatened, Kiri has had enough. With you at her side, she’s going to show the world that New Zealand isn’t all just haka and halflings. Across 16 new story missions, you’ll deal with local menaces, patch things up between old friends, and discover the truth behind a long-forgotten legend.

Transcript: Maybe you think you know this place? You've seen it on the big screen, wondered at our various landscapes. You've watched rustic scenes of village life, epic battles under great stone monuments. But the REAL New Zealand is beyond your wildest imagination.

I've never wanted for anything outside this slumbering paradise, where the long river meets the coast at the foot of the Southern Alps. The heavy days of the venison wars are long gone, but with our unique biodiversity under threat, we need hunters like you more than ever. Experience a place where quick footed shammy play atop alpine ridges so high, you can almost touch the sky, Feral Goats with sweeping horns make themselves at home on steep crags while further down, fields teem with Feral Pigs and mischievous rabbits, and on the west coast, wet and wild beech forests throng with all types of deer strutting through the thicket, from the big to the, well... bigger. But our top drawer is a little more elusive; the wily Sika Deer will make you work for it.

So come on, what stories will you tell at Te Awaroa National Park?

Picture of a certain location of Te Arawoa
Community content is available under CC-BY-SA unless otherwise noted.
Advertisement