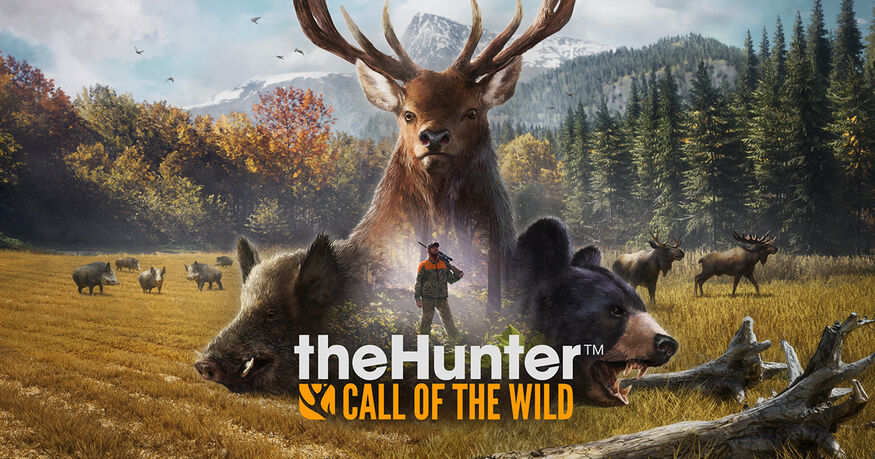 theHunter: Call of the Wild is a PC and console game that lets you experience the thrill of hunting in a manner as realistic as possible. Contrary to its predecessor, theHunter Classic, theHunter:CotW is a one-time purchase which may be extended by DLCs. Currently, it contains the option between 2 Reserves (not including the DLC hunting grounds) to play: Layton Lake District, a map modeled based on the North American Pacific Northwest, and the Hirschfelden Hunting Reserve, an area based on German farmlands. The Medved-Taiga National Park (based on the Siberian taiga), the Vurhonga Savanna Reserve (based on the African savannah), Parque Fernando (based on South-American forests), Yukon Valley (based on Alaska), Cuatro Colinas Game Reserve (based on Spain) and Silver Ridge Peaks (Colorado) can be purchased as an optional DLC.

In the current version of the game, there are 15 (39 with DLC-Reserves) animals available to hunt, including multiple breeds of deer such as the Whitetail Deer, Roosevelt Elk, and Fallow Deer but also predators such as the Black Bear or the Coyote. A wide variety of weapons can be used for hunting including different caliber rifles, shotguns, pistols, and bows. With such a vast selection, the hunter has to choose his/her weapon carefully according to the hunted animal to get the highest score possible. Shooting is not the only possibility; the willed hunter can also take pictures of the majestic creatures using the provided camera.

Each of the available areas to hunt has their own individual regions, distinct landmarks, and points of interest. These vast ranges of land can be explored and hunted equally, either by yourself or as part of a team of up to 8 players in multiplayer. In multiplayer, session-wide competitions can be started to further increase the social aspect of hunting.

The game is focused on tracking, stalking, and harvesting animals with the weapons the player starts off with or has earned. The multiplayer mode adds a social aspect to the game by adding an in-game chat to communicate and coordinate with other hunters. Animals can be tracked using the GPS device in game, which also displays current missions and time. Animals can be tracked via their footprints, droppings, vocal calls, and eating or other "need zones" such as drinking and bedding areas. Night hunting is also possible in-game and is essential to hunting some species effectively.

Players can use natural vegetation as visual cover when stalking an animal, but be warned, moving through the brush also produces more Noise than if the player were to walk through grass in open areas. Also, hunters must be aware of the wind direction and speed. Many of the species have a keen sense of smell; this may make getting close to these animals quite difficult even to an experienced hunter. Players can get around this by purchasing Scent Eliminator.

Click on the reserve icon on the interactive map to get directed to the wiki page of the respective reserve:

​​​
Dear mobile user, to use the interactive map, please switch to "Desktop View". Alternatively, in the following are direct links to the pages of the reserves:

"Mark" for the Breakdown of the Integrity bonus system

"Rizkz" for the Breakdown of the Rating system

The theHunter Wikia for providing the organs & bones images

The wiki now contains the content of patch 1.24 and the "Duck and cover pack" DLC.

It was announced that mallard ducks will be added in Layton Lake in the next update.

The wiki now contains a complete map of  Vurhonga Savanna Reserve with all regions, structures and …

Today, the new Vurhonga Savanna Reserve  was released. It can be purchased for 7.99 €/$. For owners o…

Retrieved from "https://thehuntercotw.fandom.com/wiki/TheHunter:_Call_of_the_Wild_Wiki?oldid=10946"
Community content is available under CC-BY-SA unless otherwise noted.