The Weapon Pack 1 DLC is a paid DLC that was made available in May 2018. It adds multiple entirely new weapons in the game: a semi-automatic small game rifle, a new recurve bow, and the first crossbow of the game.

The new weapons are:

The semi automatic .22 rifle adds a new, longer range approach to smaller game such as the jackrabbit and the red fox. On the other end of the spectrum, the newly introduced crossbow adds a silent-but-deadly feel to the game, offering more power than a conventional compound bow with the cost of a little more noise. Nonetheless, it is still much quieter than any of the firearms in-game. Lastly, the pack adds an alternative to compounds and the crossbow. The recurve bow offers a new way to hunt animals up close while using a technology that has been used for thousand of years. 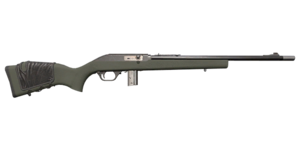 Developed by Slovenian gunsmiths, the Virant is the go-to rifle for varmint control and target shooting. The .22LR’s low recoil and superb design makes this rifle a perfect starting point for people learning the basics of shooting.

Small Game Hunting: In addition to it’s low recoil, this semi-automatic rifle allows you to fire multiple small rounds, making it a great choice for rabbit hunting and target practice. Perfect for jackrabbits and other small game, the Virant is not used to hunt larger animals. 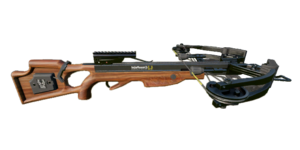 With 165 foot-pounds of draw weight, this precision-crafted crossbow sports enough power to take down even the largest game animals. With a beautiful woven carbon fiber barrel, a built-in rope-cocking device, and a 4-arrow quiver, the Crosspoint CB-165 is ideal for short-range hunting.

This premium scope is designed for crossbows shooting 300 feet per second or faster. With three duplex crosshairs and variable zoom settings up to 5x, this is the perfect crossbow scope for any situation.

Range and Power: The Crosspoint CB-165 Crossbow is more powerful and offers greater range than any other bow currently in the store. However, as with everything in hunting, it’s a trade-off. This crossbow is rather large and heavy, requiring significant space in your backpack. Additionally, reloading the crossbow is slower than most other weapons so make sure you make each shot count! 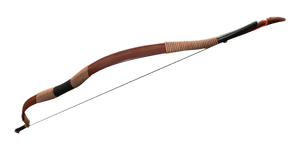 In Chinese mythology, when 10 suns rose from Earth and turned the world into a barren wasteland, the archer Houy shot down 9 of the 10 suns, leaving only the last one. This bow takes its name from that myth. Based on the designs of traditional Chinese Qing recurve bows, the Houyi Recurve Bow has ample penetration power and can take down medium game at short ranges.

Spook fewer animals in your surroundings: This recurve bow gives you an unparalleled advantage compared to rifles, handguns, shotguns or even crossbows. When taking a shot, the longbow is much quieter and will spook a smaller number of animals within a limited radius. But as always, this is a trade-off; although the longbow is currently the quietest weapon in the game, it offers limited range compared to many other weapons.